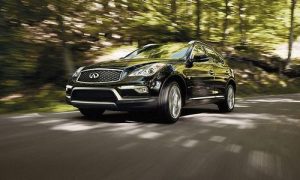 This year, just like every other year in the past several decades, Americans will buy more Ford pickup trucks than any other vehicle. The final tally for 2016 will come in around 800,000.

Other big trucks come in far behind, and then there’s the Toyota Camry and Honda Civic. American drivers are creatures of habit, so it takes little effort for Ford to win the annual sales crown.

To squeeze a big sales boost out of a less-popular vehicle that’s been around awhile, on the other hand, is just about the toughest trick in the auto industry. To that end, Bloomberg crunched sales data through November to see which models posted the biggest demand spikes and swoons. These are the vehicles that show us the future — and soon-to-be past — of the car business.

Infiniti, Nissan’s luxury brand, now makes four sizes of SUVs or crossovers. The QX50 crossover is the second-smallest among the four, perhaps more accurately called the just-right size. This is the size and shape of vehicle that Americans want to buy right now, more than anything else. The latest iteration is a little larger and sportier than before. Think of it as the poor man’s Porsche Macan, with similar performance for almost half the cost.

Depending on how you slice it, the Mercedes family now has about 25 members. In that bustling Stuttgart house, the GLE crossover is now the second-favorite sibling. It topped both the E-class sedan and its smaller, cheaper SUV siblings in U.S. sales this year. Sure, the C-class sedan is still the most popular model. But for much of the world, a GLE is now the Mercedes to aspire to.

This one just barely ducked through our filter of all-new models; the version Volvo rolled out in 2015 was, pretty much, an existing vehicle in name only. Volvo rolled out an entirely new platform, engine lineup, and an interior styling complete with little tags fashioned as Swedish flags. The XC90 picked up Motor Trend’s coveted SUV of the Year award in 2015, and Volvo ramped up production. The past year saw the brand make good on this extensive investment.

Few people care for little sports cars anymore — at least, those not stamped with a Porsche badge. That makes it all the more incredible for Audi to have moved about 3,000 TTs in 2016. Alfa-Romeo, by comparison, will struggle to offload 500 of its dead-sexy 4C. Credit Audi’s coup to a 2015 refresh that included a new, lightweight aluminum body, very cool headlights, and futuristic interior design.

Another small crossover. See a trend here? BMW’s starter crossover is no longer an afterthought wedged between its 3-series sedan and the X3. The latest version finally makes good on BMW’s driving dynamics, a particularly nice feature when paired with an even higher riding position. Buyers noticed.

Meanwhile, on the down side …

Make no mistake, this is a great car. The Fit’s ratio of interior space to exterior size seems to bend the laws of physics, and that equation has only improved over time. The problem, one suspects, is appearance. The Fit still looks like a tiny car, even though designers have learned to make tiny cars look like large-ish SUVs. That bastardization of physics tends to win over buyers these days.

The 6-Series, while incredible, has an identity crisis of sorts. It’s built for four people, yet often has only two doors. It’s made for speed and weighs 4,000 pounds. It can be had as a convertible, which no one seems to care about these days. Customers still love this weird mash-up of a machine. They just prefer it in a jacked-up version.

The 500L is Fiat Chrysler’s acknowledgement that Americans like cargo capacity. The problem: It still looks like a Fiat. Curiously, U.S. drivers are just fine with the bones of the car; they would just rather have them packaged as a Jeep Renegade, a close cousin to the 500L that will top 100,000 in U.S. sales this year.

It’s tough to fight Honda and Toyota in the regular-old-car game, but Ford is doing a decent job with the Fusion, and Chevrolet’s Malibu is hanging in there. Saddled with sub-par reviews, however, the Chrysler 200 just couldn’t keep up. Fiat Chrysler is phasing out the 200 and, by the looks of this year’s sales, may have already stopped luring buyers with big incentives.

Kia’s cruise ship had two things going for it when it came to the U.S. in 2014: novelty and marketing money. By 2016, however, the novelty was gone, and the LeBron James ads were growing less prominent. Only the crummy reviews kept coming.

Weston Auto Gallery specializes in luxury and performance cars for all Colorado seasons! Our pre-owned vehicles go through a rigorous inspection from mechanical to cosmetic; every detail of the car is inspected, repaired or replaced. When you buy a Weston Auto certified pre-owned car, you can rest assured that you have just received the best pre-owned car on the market. Visit our online showroom or call us today at (970) 377-3333 for the most up-to-date inventory.